Part numbers and casting numbers are pretty much the same when it comes to "hard parts". Those are those big long codes (C7ZZ-6540544-DR, etc) that you find that identify every Ford part made. Many parts are too small to have the number cast or printed on it, but it still has a casting number. These numbers tell you what that part was originally designed for, what department designed it, and when it was designed. People are often confused by looking at a part or casting number. Just because a part was originally made for a Falcon doesn't mean the part came off of a Falcon. Many Mustang parts were originally designed for the Falcon and carry a Falcon casting number. Ford is famous for using parts designed for one car on a variety of models.

Basic Part Number:
This is the number that identifies what the part actually is - 2062 is a front slave cylinder, or 6268 is a timing chain set.

Often friends will call me trying to determine Ford parts they can use or substitute. In SCCA Solo and Club Racing the rules often allow updating/backdating parts. In other words use a older or newer part from that product line of car. An example is my 1985 Mustang in American Sedan, generally I can use any bolt on component from 1979 through 1993 Capri or Mustang. The front brake system currently on the car is from a 1987 Mustang. The original 1985 brake system utilized an 10" front rotor while the 1987 system is 11" increasing the swept surface area of the brakes. The entire front suspension had to be replaced, lower front control arms, spindles, rotor, strut, calipers, brake hoses. Knowing how the part number system works helped considerably.

An example would be F4ZZ (prefix), 6E086 (basic part number), -A (suffix). The first character of the prefix indicates the decade of design, starting with "A" for the 1940's, B for the 1950's, C for the 1960's. The second character of the indicates the year within the decade, "C5" would be 1965, "F4" would be 1994. The third character of the prefix indicates the product part the part was originally designed for, with few exceptions. Note that "outside sales (code F), "Motorcraft Brand" (code P), or imported parts from Ford of Europe (code R) are identified with their product line code in the third position. The fourth character indicates the part source, whether it is product engineering office or service part. The part number F4ZZ-6E086-A would equate to F4 = 1994, the third character Z = Mustang, the fourth character Z = Ford Parts and Services. The next group of numbers describe the part. I use these numbers at swap meets or salvage yard to match to existing numbers I have. I know if the basic number is the same it should be compatible if the suffix number on the part you are comparing is a later alpha character than the existing one. Early suffix designations generally begin with "A" and increment through the alphabet as design changes are made that affect interchangeability. If the suffix on the part I was looking to replace (my existing part) was an "A" I could use parts with have a "B" suffix. If the part I was looking to replace (my existing part) had a "B" suffix, a part with the "A" suffix would probably have a compatibility issue. Parts that have later suffix codes are the ones to get. 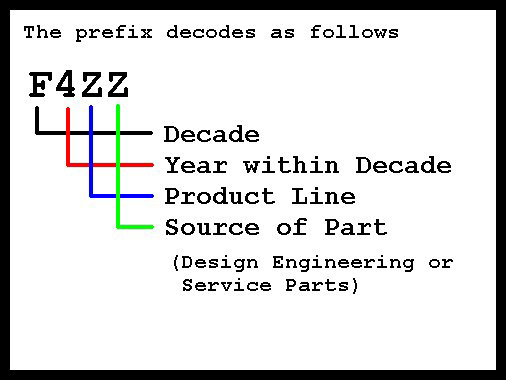